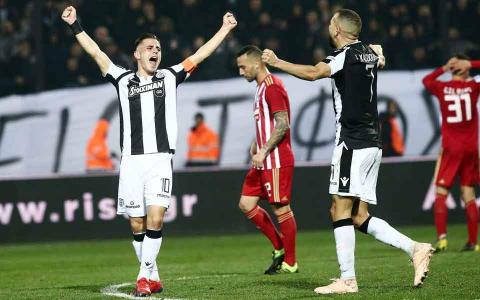 PAOK is closer than ever not only to winning its first league title after 34 years, but also to finishing the league unbeaten, after comprehensively defeating its main rival Olympiakos 3-1 at home on Sunday.

The Thessaloniki giant has opened a nine-point gap from the Reds thanks to two early goals - both in the first 20 minutes - from Adelino Vieirinha and Diego Biseswar, and a late one from Chuba Akpom, at an overflowing with passion and excitement Toumba stadium. Daniel Podence scored a consolation goal three minutes from time.

"The third-minute goal by Vieirinha upended all our plans for the game," stated Olympiakos coach Pedro Martins.

This time PAOK's fans and officials behaved themselves, unlike last season's home matches with Olympiakos and AEK, and greeted their team as the new champion. PAOK needs seven wins (or 21 points in total) from the 10 remaining...