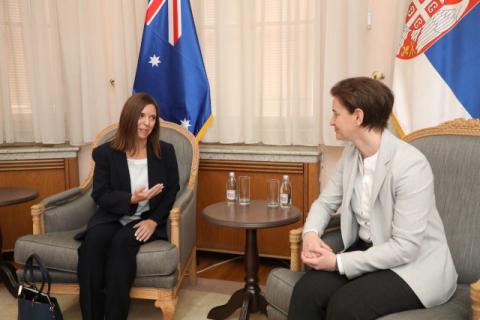 According to the Serbian government, they discussed "further enhancement of bilateral cooperation between the two countries."

Brnabic expressed her hope that the positive trend of cooperation between Serbia and Australia will continue in the future, adding that Serbia's interest is to intensify cooperation in the fields of energy, economy and information technologies.

The interlocutors agreed on the significance of the implementation of the Jadar project, which is being carried out by the Anglo-Australian multinational Rio Tinto.

Stewart pointed to the growing interest of other Australian firms in doing business in Serbia.

The prime minister pointed out that European integration is a strategic priority for Serbia, assessing that further reforms will provide even more favourable conditions for the improvement of economic cooperation between Australia and Serbia.