Enormous Fire near Plovdiv is Under Conrol, Firefighters Worked all Night 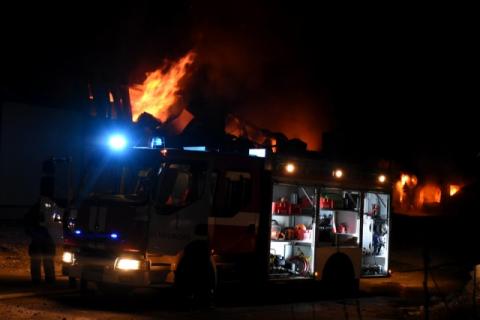 Big fire that broke out in a meat mill in a factory in the village of Voyvodinovo in Plovdiv was localized. Early in the morning firefighters continued to extinguish a few remaining small areas from the fire. Today, authorities wll start looking at the causes of the incident.

The fire signal was filed yesterday at 18:30. According to police information, it broke out in a processing and packing room.

The flames left the workroom behind the factory's office building after employees had left. Due to the fact that the construction of the site is made of thermo-panels, the fire quickly spreads over them and covers the entire periphery of the site, which covers an area of ​​about 8 decares, said the director of the Plovdiv fire commissioner Georgi Mangarakov.

Firefighters are forced to refuel the tanks because the fuses shut off electrical power from the switchgear, which in turn shuts down the voltage to the plant's fire pumps. The three tons of water the firefighters had initially had to use was gone very quickly.

17 fire engines from Plovdiv, Karlovo and Saedinenie were involved in the fire extinguishing.

The setting this morning is calm, there is no danger of explosions. Voyvodinovo also has specialists in measuring air quality.