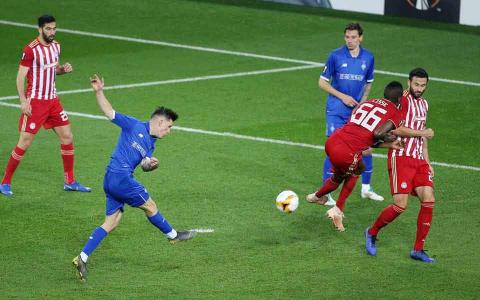 Olympiakos will need to win in Ukraine next week, or at least snatch a 3-3 draw, if it is to go through to the round of 16 of the Europa League, after conceding a late equalizer to Dynamo Kiev for a 2-2 first-leg score in Piraeus on Thursday.

Greece's sole representative left in Europe was happy to open the score early in the game as captain Costas Fortounis found Ahmed Hassan unmarked and he tried a left-footed shot that found its way to the Dynamo net on the ninth minute.

However a concentration lapse by the Reds' defense on the 28th allowed Dynamo to spread its game from the right. Costas Tsimikas missed Viktor Tsyhankov, he spotted Tomasz Kedziora who crossed inside the box to Vitaliy Buyalski and he equalized with ease.

Before the first half finished, Olympiakos regained the lead through a moment of class by Gil Dias: Collecting the spills from a corner kick...

672,300 People have Acquired Citizenship in One of the 27 EU Member States
AGERPRES, at 131 years since establishment: Congratulations messages from partner news agencies