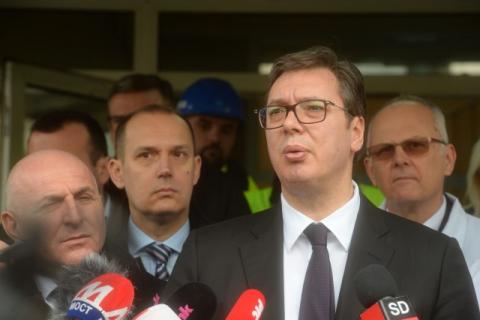 Aleksandar Vucic said on Thursday Rio Tinto's Jadar Project would be a major development boom for Serbia and its Podrinje region, which has 10 percent of the world's lithium deposits.

"The mineral jadarite is one of Serbia's biggest hopes and now it's a question of how the lithium required for electric car batteries can be extracted," Vucic told reporters in Loznica, western Serbia.

He said the lithium deposits, situated near the city, were a fantastic source of wealth for the country.

Talks about all this are underway with Rio Tinto and the company is already in talks with Chinese firms as there are 26 ingredients from which the lithium needs to be extracted, which is a technologically complicated process, Vucic said.

By saying this, Aleksandar Vucic was apparently referring to a Serbian proverb, "The hardy walnut is a strange fruit; you'll break your teeth but won't crack it open," that is often used as metaphor for Serbia and its people.

And the president said this in the western country, in the town of Lozinica, the Macva District - a part of his "Future of Serbia" campaign started last week.

In addressing the people gathered in front of the General Hospital in Loznica, Vucic said he "did not fear Serbia would not accomplish its accelerated progress and prosperity, if it preserves peace."

"Our only trouble is that some people would like to drag us into conflicts, take us back. We'll do our best to preserve peace. Never will we allow anyone to exile, humiliate, attack the Serb people in Kosovo and Metohija or anywhere else our people live," was his message.

After the 2014 floods, he said, "hard and painful reforms had been launched" in the area - thanks to which...