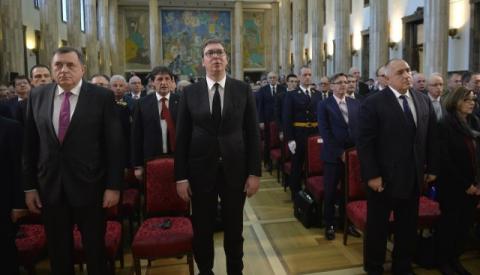 The ceremony in the Presidency was attended by ministers Ivica Dacic, Nebojsa Stefanovic, Zlatibor Loncar, Aleksandar Vulin, Vladan Vukosavljevivic, chairman of the Presidency of Bosnia-Herzegovina Milorad Dodik, and Bulgarian PM Boyko Borisov, who is among the recipients.

Borisov received the Order of the Republic of Serbia on a sash.

The mayor of Corfu, Konstantinos Nikolouzos, received the Order of the Serbian Flag, third class.

The Gold Medal for Merit was given to Holocaust historian Gideon Greif.

The Sretenje Order, first class, was given to the National Museum in Belgrade, which is celebrating 175 years since it was established, the Faculty of Agriculture of the University of Belgrade, the Kralj Petar Prvi elementary school, which is this year 300 years old.

Bulgarian PM Boyko Borisov congratulated the citizens of Serbia on today's holiday, and said the award he was given was a great honor.

"I congratulate the holiday, be healthy, God save us all as Christians. Thank you on behalf of all those in Bulgaria who have made efforts during the EU presidency and who believe that Serbia is an inseparable part of Europe, and...