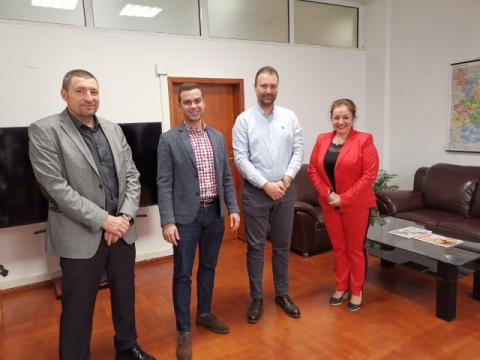 Two state organizations - the SME Promotion Agency and the Center for the Promotion of Agricultural Co-operation between China and the Central European Central Bank (CNESC) to the Ministry of Agriculture, Food and Forestry will join forces to more effectively promotion of Bulgarian goods and services in China.

The Executive Director of BSMEPA Dr. Boyko Takov and the Director of the Center Mr. Vasil Gelev discussed on Wednesday the opportunities for exchange of information and cooperation in the organization of the fifth edition of the International Exhibition of Investment and Trade between China and the countries of Central and Eastern Europe / The 5th Shanghai-CEEC Investment and Trade Expo. The event will take place from 8 to 12 June in Ningbo, China, with BSMEPA traditionally organizing the Bulgarian national participation at the exhibition.

The Exhibition will also host a CEE / 16+ Product Fair, which opens the opportunity for manufacturers from these countries to familiarize Chinese consumers with the goods and services they offer. In this connection, the Center is planning an initiative to collect samples.

In this regard, Mr. Gelev proposed, with the assistance of the Agency, after the end of the fair, the companies that participated in the Bulgarian National Stand and the Exhibition of Samples of their products, if they were interested, to exhibit their products also in the permanent exhibition hall of the Bulgarian Chamber of Commerce and Industry Youth Innovation Center China - CEE in Ningbo. The advantage of this type of cooperation is that samples of their production will be able to present companies that could not participate in the exhibition organized by BSMEPA.

According to Dr. Boyko Takov, the collaboration between the two...

Automotive production down 11 pct in 2020

Between two worlds: The role of the OECD