Albania Braces for Unrest Ahead of Opposition Protest 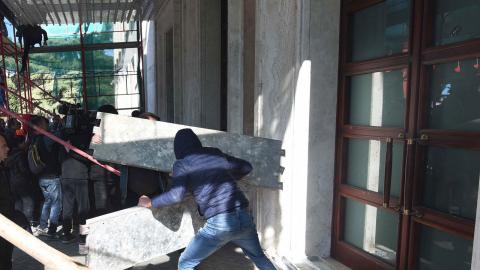 Police said they planned to deploy about 1,200 officers in Tirana to deal with fears of violence, and warned journalists to wear gas masks to avoid tear gas inhalation.

"From the information that has been collected by certain services, we know that violence is being incited," the police said.

"There is an aim to forcibly occupy parliament by using violence against the personnel in charge of protecting this institution," the statement added.

Opposition leaders have already said their MPs will quit parliament and "burn" their mandates.

They and have demanded the resignation of the Socialist Prime Minister Edi Rama, the creation of a caretaker government and early elections.

The move has met strong criticism from Albania's US and EU allies, which called it an undemocratic move.

The opposition plans to hold the protest at 10am on Thursday, when parliament was expected to hold a session.

But the speaker of parliament, Gramoz Ruci, on Wednesday said he was cancelling the session, apparently to defuse tensions.

The opposition Democratic Party's National Council voted to ratify the decisions of the party leadership to withdraw from parliament, while several hundred supporters hailed the decision outside party headquarters.

Both the US embassy and the EU Delegation in Tirana have condemned unequivocally the opposition parties' decision decision to "burn" the mandates of their MPs.

"Threats by the Democratic Party, the Socialist Movement for Integration, and other opposition parties to abandon their mandates in Parliament undermine the basic principles of democracy," the US embassy said on...