Vucic urges Serbs in Kosovo not to join "Albanian army" 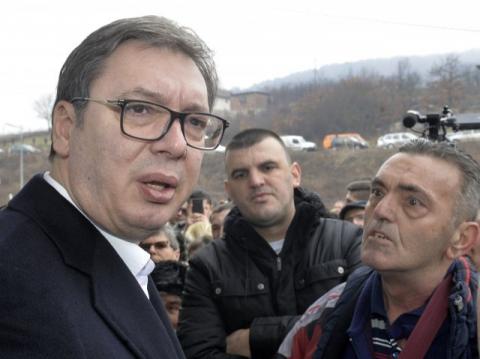 And he urged the Serbs not to do that.

Vucic made his comments after a meeting in the Raska Disctrict with officials of the Serb List, a political organization in Kosovo that gathers Serbs.
He said that he told them Serbia and the Serbs cannot survive if they go against each other, and asked them not to join or participate in the Albanian army in Kosovo and Metohija (KiM).
"We will see if the Serbs will respond or not," he added.
He also said that he for the first time heard from people from Strpce and Gracanica (Serb enclaves in Kosovo) that they are increasingly facing problems with supply of foodstuffs from central Serbia, and that even in the north of KiM there are problems because Albanians are "organizing border police to check how the goods had arrived, and grab them."
"Our job is to fight and we will fight for our people to survive," Vucic said.
He added that Serbs in Kosovo and Metohija react badly to statements coming from Pristina these days, which he added are the result of the nervousness of Albanian leaders.
His message was that the state will protect the Serb people.
"Although we may look weak to some, because we are not threatening anyone, because we are not shouting, we are stronger than they think," said the president.
Vucic added that he "fully understands why he is now the greatest enemy to the Kosovo Albanians - because to their irrational messages, he responds with rational ones, and to messages of conflicts - with messages of peace and stability."
"And I will continue to strengthen Serbia, instead of weakening it, as was the case in the past period," Vucic said.
Asked "why he, who is criticized because of Kosovo, has been left with the 'hot potato' in his hands - when (late...