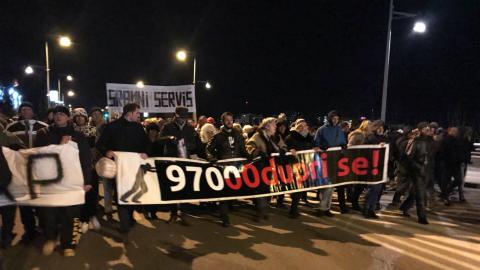 Civic activists supported by most opposition parties in Montenegro have kept up the pressure on the government, demanding the resignation of the country's top leaders, starting with President Milo Djukanovic, and focusing on alleged corruption in their ranks.

The crowd marched through the capital, Podgorica, on Saturday chanting, "Milo thief" and carrying banners reading: "No more crime," "Rebellion" and "We are the state".

They accuse the country's long-time leader, President Djukanovic, who has held power for almost 30 years, of presiding over poverty, a loss of human rights and media freedoms and systematic corruption.

Actor Slavisa Grubisa addressed the crowd, saying that the protests are spurred by the ruling DPS party: "They forced us to take to the streets".

Beside Djukanovic, the protesters demanded the resignation of the Supreme State Prosecutor, Ivica Stankovic, and the chief prosecutor for organized crime Milivoje Katnic.

They accuse senior law officials of ignoring evidence and not prosecuting manifest corruption in the ranks of Djukanovic's inner circle.

The protesters marched by the Montenegrin broadcaster, RTCG, and demanded more professional and fair reporting.

Saturday's protest was the third in a row and following the revelation of footage and documents that appear to implicate top officials in obtaining suspicious funds for the President's ruling party, the Democratic Party of Socialists, DPS.

A video clip from 2016 surfaced in January which showed Dusko Knezevic, chairman of the Montenegro-based Atlas Group, appearing to hand the then mayor of Podgorica,...