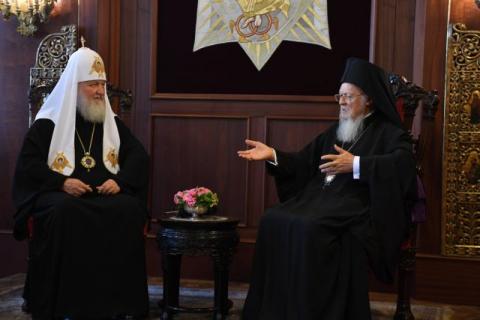 The issue is forcing the primates of other Autocephalous Orthodox Churches to choose sides in a battle of the Titans - between the first-ranking Ecumenical Patriarch Vartholomeos and the leader of the most populous and wealthy Autocephalous Church in Eastern Orthodoxy, Patriarch of Moscow and All Russia Kirill. Orthodoxy came to Moscow from the Ecumenical Patriarchate via Kievan Rus which first embraced it.

The dream of a 'Third Rome'

Since being granted Autocephaly by the Ecumenical Patriarchate in the 16th century, Moscow has promulgated a newfangled theory that would have it playing the leading role as "Third Rome", the Eastern Roman Empire (or Byzantium) being the second.

Yet this is also a deeply political and geopolitical affair which pits the Ecumenical Patriarchate, backed traditionally by the US in the face of Russian claims, against the Moscow Patriarchate in alliance with Russian President Vladimir Putin, who has publicly attacked Ecumenical Patriarch Vartholomeos and said that he was bribed by Ukrainian President Poroshenko to grant his country's Church independence from Moscow.