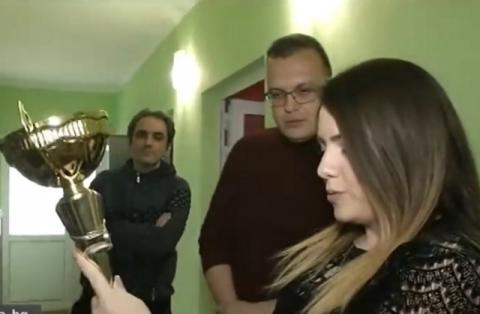 Bulgarian girl - first in the world of chess. This is 15-year-old Nurgul Salimova, from the small village of Krepcha in Targovishte area, who has been on the top of the world ranking for chess for under 16 years.

Her passion for the black and white board comes in the kindergarten. "I was four. Then my father taught me how to move the figures. He introduced me to the game. Then, along with my grandfather, they began to show me how to play. I learned the rules, "said the young chess player to NOVA.

A year after her father and grandfather nurtured Nurgul in chess, the girl also tried her first tournament in Silistra. She is the smallest participant - she is not even 6 years old.

"I became first among 8 years old children, not having been 6. I became even more interested and continued to improve. I have ten state titles, I think. I have always wanted to become a world champion for women. To get closer to Antoaneta Stefanova because she is my favorite chess player, "says Nurgul Salimova.

"As soon as she became a Republican champion, the coaches in the national team saw potential in her and invited her to the national team and offered her even a coach. There are also cases when she has not returned home for a month. It's hard, but we are getting used. Everything is for her good. Nine titles and one republican title for women. One world title girls up to 12 years. One European Union title for girls up to 8 years old. I am champion of the European Union, among boys and girls, until 12 years of age in 2015. Here, in Bulgaria, there are no tournaments to cover norms, at least not so often. And she have to travel abroad and participate in tournaments there, "adds her father, Ilhan Salimov.

Hundreds of Flights Canceled in UK because of the Storm "Dennis"

China is Cleaning and Quarantining Banknotes due to the Coronavirus

Confirmed: Kubrat Pulev will Anthony Joshua on June 20 in London

First Victim of the Coronavirus in Europe