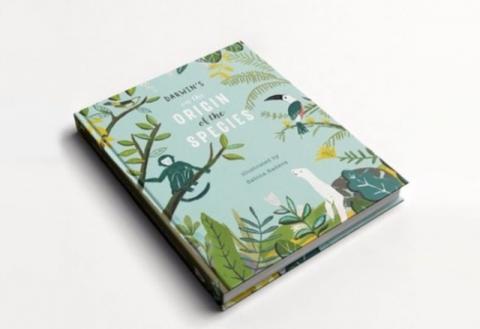 "Very important project, realized in the most beautiful way. The thorough text of Sabina Radeva and her magnificent pictures together tell the story of the origin of the species and the evolution itself with clarity, humor and great charm. "

These are the words of Emma Darwin - the great-granddaughter of Charles Darwin - and refer to a children's book with pictures published in the UK: "Darwin's on the Origin of the Species" written and painted by Bulgarian Sabina Radeva.

Sabina is a graphic designer and illustrator, currently lives in Oxford, England. From the biographical reference on Penguin's website, we learn that in 2008 she received a master's degree in molecular biology at the Max Planck Institute, Germany. In 2009 she left science to focus on a creative career and studied as an illustrator. She is a mother of two little girls who are her source of daily inspiration.

With "Origin of Species," Charles Darwin finally explained his theory 160 years ago. Today, Sabina Radeva unites her two passions to retell this original text in 64 pages. The accessibility of adaptation represents the evolution of children and adolescents through stylish illustrations and a simple, easy-to-understand text.

The idea of ​​making this simple retelling - with pictures, for children, occurred to her while looking at a beautiful edition of Darwin's work, but too long and written in outdated language.

"Evolution through natural selection is one of the best scientific ideas because it explains an extremely wide range of facts in biology. But many people do not understand Darwin's theory, and some do not even believe in evolution, "Radeva explains in her page on the Kickstarter platform, where in 2016 she decided to look for followers to help fund...