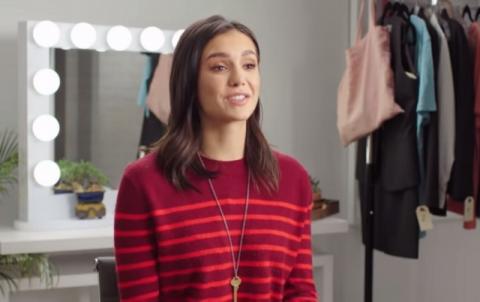 First, see it before you find out more about the new video with Nina Dobrev:

"Many of you may have known me from sitcom Fam or the Vampire Diaries series, but until recently I did not realize that I was not made to play in prestigious teenage drama or in studio films, no, I have to make videos about the safety of Bulgarian airlines. "

With these words, the American actress of Bulgarian origin, Nina Dobrev, made the introduction in a video of a new humorous series of "Vanity Fair". In it, she was filming a video on safety during a flight of the fictional "leading airline of Bulgaria" named Bulg-Air-Ia and commented on her participation in the project with obvious irony.

In the comedy clip, Dobrev explains how she had to prepare for the role for three months, but that she feels how she seems to have been preparing for this role throughout her life. Then she speaks in Bulgarian: "It is time to prepare for your departure, we are happy that you have chosen Bulg-Air-Ia airline."

There are more lines of almost perfect Bulgarian like: "To put pre-belts, insert the metal nozzle into the buckle and pull the end of the belt to tighten it."

Dobrev also explains that it is a great luck to be directed by Kazimir Slavinski - an obviously fictional name of a director.

This is not the first case in which Nina Dobrev demonstrates knowledge of her mother tongue in front of Vinity Fair. She has done it before for the media in a video where she teaches jargon in her native language. The Vanity Fair comedy series previously included Antonio Banderas, Gerard Butler, Alicia Vikander and Salma Hayek.