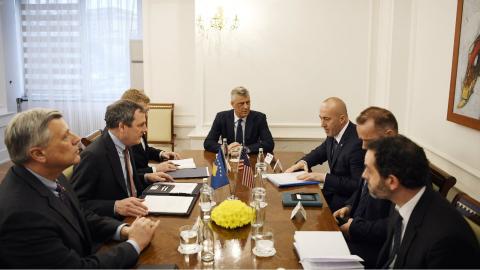 Kosovo's president, Hashim Thaci and PM Ramush Haradinaj during the meeting with the US delegation on Wednesday evening. Photo: Kosovo Presidency

Haradinaj discussed the matter on Wednesday evening with the Director for European Affairs at the US National Security Council, John Erath, and with the Balkans Director of the council, Brad Berkley.

The two US officials "reiterated the clear stance of the US administration that the tax must be suspended in order to continue the dialogue and efforts to reach a comprehensive agreement between Kosovo and Serbia," a statement issued by President Hashim Thaci, who attended the meeting, said.

Haradinaj did not even mention the issue after the meeting ended. He wrote on Facebook only that Kosovo remained "willing to have a legally binding agreement [with Serbia] that results in mutual recognition within the existing borders".

He said Kosovo was "also willing to undertake the rights and obligations of membership of NATO, the United Nations, EU and other international organisations, and for good neighbourly relations".

President Thaci has made no secret of his belief that Kosovo must not quarrel with its most important ally by far. He called on state institutions to "take concrete actions in line with the friendly advice of the US, as soon as possible.

"The actions should be in the function of preserving and strengthening strategic cooperation with the US, and our state commitment for dialogue and a peaceful agreement," Thaci is quoted as saying.

After meeting the US delegation on Thursday, the head of Kosovo's delegation on negotiations with Serbia, Fatmir Limaj, also appeared to distance himself from the Prime Minister. "It is already clear that there are different approaches on this issue,"...