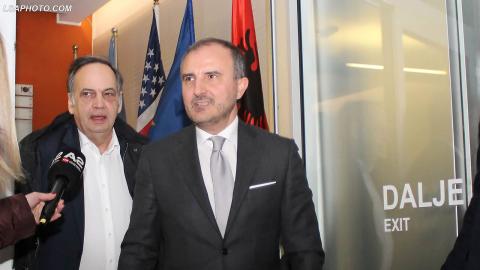 After meeting opposition leaders, he said: "MEPs stressed unanimously that leaving parliament is a mistake. We call on the opposition to resume their mandates and ensure a constructive and democratic functioning of Albania's parliament."

Lulzim Basha, head of the main opposition Democratic Party, claimed that their opinion was the result of "disinformation" distributed by Socialist Prime Minister Edi Rama all over the world. Petrit Vasili, from the Socialist Movement for Integration, called the MEPs' stance "an unclear vision".

"The rule of law has been destroyed by corruption and this is known by all citizens," he said in a statement published shortly after the meeting. "It is strange that Euro-parlamentarians are not seeing it," he added.

The government was delighted by the MEPs words.

The government spokesperson Elisa Spiropali said: "The parliament and government are legitimate and properly elected. Electoral problems do not question their legitimacy. Intercepted conversations should be decided by courts."

She was referring to a to a joint investigation by BIRN Albania and Voice of America into collusion between organised crime networks and various officials of Rama's governing Socialist Party in the last parliamentary elections.

Opposition MPs relinquished their mandates last week and started a round of street protests, two of which ended in violence.

The opposition claim the Socialist Party majority in...