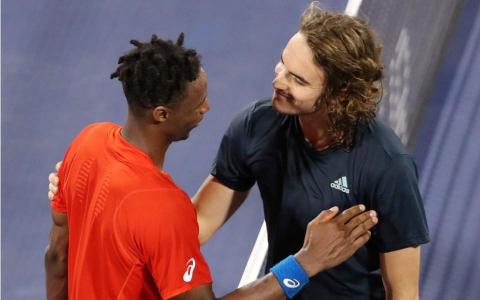 Stefanos Tsitsipas reached the final of the Dubai Championships by beating Gael Monfils 4-6, 7-6 (4), 7-6 (4) on Friday, keeping the rising star from Greece on course for back-to-back ATP titles.
Roger Federer, who is looking to win his 100th career title, meets Borna Coric in the second semifinal later.
The 20 year-old Tsitsipas, who beat Federer en route to the Australian Open semifinals this year, won the Open 13 in Marseille without dropping a set last week for the second title of his career.
He has continued his form in the United Arab Emirates and is now assured of a place in the top 10 of the world rankings for first time, replacing Marin Cilic.