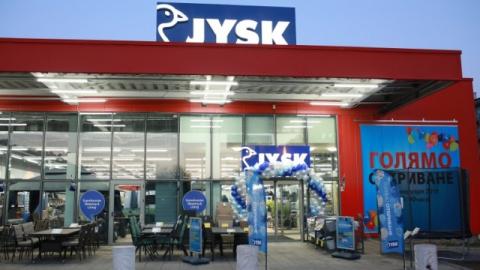 Profit before tax for the 12 months to end of September increases by impressive 354% to 1.27 million. Globally, the turnover reached € 3.58 billion and the pre-tax profit was € 474 million.

The Scandinavian group has over 2,700 sites in 51 countries. The number of JYSK Bulgaria stores at the end of 2018 was 25, the number of employees - more than 300. Today the company opened another site in Dimitrovgrad. And the company plans to increase their number by at least three this year. The finalization of the distribution center in Bozhurishte - a hub for a total of more than 200 stores from 7 countries in Southeast Europe - is to be finalized.

The investment up to now is over € 105 million. By the end of the year it is expected that up to 300 new jobs will be opened for employees in the administration and warehouse. This is the fourth for JYSK such a base in the world that will serve Bulgaria and the countries in the region: Greece, Romania, Serbia, Slovenia, Bosnia and Herzegovina, Croatia.