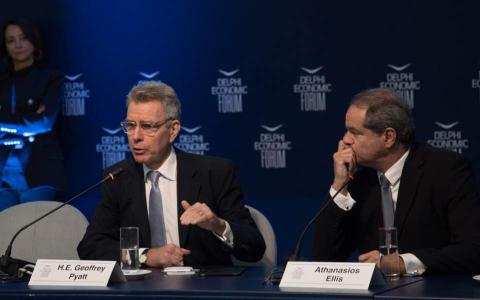 A day after energy giant ExxonMobil announced it had discovered a natural gas reservoir in Cyprus's Block 10, US Ambassador to Greece Geoffrey Pyatt said US Secretary of State Mike Pompeo is likely to participate in the next trilateral summit between Greece, Cyprus and Israel which will be held in March in Israel.

During a conversation with Kathimerini English Edition editor in chief, Tom Ellis, at the Delphi Economic Forum, Pyatt confirmed that talks are underway to include Pompeo in the meeting.

The participation of the US's top diplomat in the summit would send a strong signal of support for the cooperation between the three countries and Egypt, but also for the need to develop wider synergies in the Mediterranean.
Pyatt said the last part of the Southern Gas Corridor will be completed thanks to the work initiated by a government of New Democracy and completed...