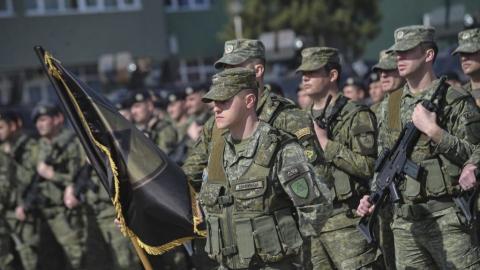 Kosovo started its three days of commemorations for KLA commander Adem Jashari and the army which fought against Serbian forces in the 1998-99 conflict with a parade of the Kosovo Security Force.

Every year on March 5-7, Kosovo marks the anniversary of the killing of Jashari and 59 members of his extended family in Prekaz in 1998 - an event that was seen as a turning point in the former Serbian province's struggle for independence.

"Today we are marking the 21st anniversary of the glorious Epopee [commemortion] for the KLA…but on the same day we commemorate the ethnic cleansing [of the Kosovo War], which saw 13,000 civil victims, 400 massacres and 20,000 raped women," President Hashim Thaci told the crowd.

He also used the occasion to highlight his country's aims to join international organisations, and once again pledged to strengthen relations with the US, which have been under pressure in recent months over the tax hike on Serbian goods introduced by Kosovo.

"Kosovo will be a member of NATO and of international organisations, and will strengthen its collaboration with the USA," Thaci said.

Meanwhile, Prime Minister Ramush Haradinaj said that transforming the KSF into a regular army in a parliament vote in December last year "glorified this force even more."

He added: "The Kosovo army should not be used against the people of Kosovo in either the south or in the north, but it should serve all of the citizens of Kosovo."

The brother of Adem Jashari, Rifat Jashari, also spoke at the parade, saying that he hopes the Kosovo army will be ready "to protect the country, just like the KLA did."

The parade of Kosovo Security Force at its main army base "Adem Jashari" in Pristina. Photo: Atdhe Mulla/ BIRN.
The parade...