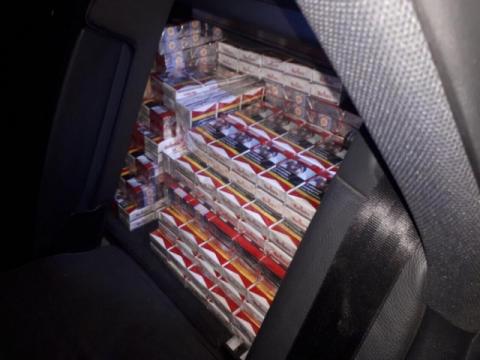 Two cases of smuggling of cigarettes revealed customs officials from the General Directorate of Customs Intelligence and Investigation (MRD) in the area of ​​Kulata border checkpoint. They seized 30,950 boxes or 619,000 pieces of illegal cigarettes. Pre-trial proceedings were initiated in the cases under DG RTD under the supervision of Petrich, which have already been finished.

On February 18, at the Kulata border checkpoint, two buses traveling on regular services from Greece to Bulgaria were inspected. The baggage of a passenger traveling on the first bus found 3990 boxes (79 800 pieces) of cigarettes without banderol. On a second check, in the baggage of another traveler, from the second bus, 2,000 boxes (40,000 short) cigarettes without banderol were found. The total amount of uncoated cigarettes found in buses is 5990 boxes - 119 800 pieces.

Four persons - perpetrators and assisting persons - were charged with the case. After an agreement reached between their defense and the District Prosecutor's Office-Petrich agreement, the defendants were punished. Three of them have one year 'imprisonment' with a three-year probation period and fines in different sizes - from 700 to 1000 leva. The fourth defendant has been punished with effective punishment of five months "imprisonment" and a fine of 1000 levs.

499 200 cigarettes (24 960 boxes) of cigarettes without a Bulgarian excise label were detained by customs officers a week earlier when a carriage was checked at the Kulata border checkpoint. Customs officers are stopping to check for compliance with the excise legislation, a carriage coming from Greece and carrying ten used cars. At check-in, nine found a total of 24,960 boxes of illegal cigarettes of different brands.