In Serbia, Protests as Therapy 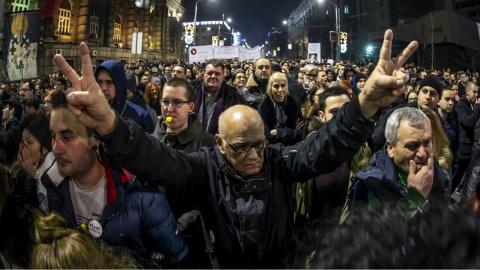 That "crypto-depression" emerges, he said, as a result of the constant portrayal of Serbia by its ruling party and loyal media as enjoying a "golden era".

"If you're confronted with this unanimous opinion that everything is not good but excellent, you must blame yourself if you don't feel this way," he said. Ordinary Serbs "are apathetic, they are very worried and they can't see any objective sign that they are not guilty for their own situation."

For more than three months, thousands have turned out for a weekly march through downtown Belgrade, and more recently other cities, in protest at Serbia's ruling Progressive Party and its leader, President Aleksandar Vucic.

Spurred to action by the beating of an opposition politician in late November, the protesters accuse the Progressives of nurturing a climate of 'political violence' and of monopolising power to a degree not seen since the rule of late Serbian strongman Slobodan Milosevic in the 1990s.

Vucic, a former hardline nationalist who has spent the past decade recasting himself as a pro-European reformer while maintaining friendly ties with Russia, denies the accusations and insists Serbia has not had it so good in decades.

Poster depicting President Vucic as Pinocchio at one of Belgrade's protests. Photo: BIRN.

"During the past 30 years things have progressively gotten worse concerning democratic freedoms and our public institutions," Vukosavljevic-Gvozden wrote in emailed comments to BIRN. "This worsening of living conditions has resulted in a general state of apathy and hopelessness."

Such hopelessness, she said, manifests itself in an exodus of young...