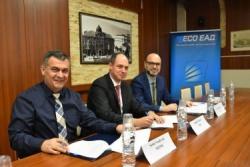 Bulgaria, Northern Macedonia and Albania have signed a memorandum on integrating their electricity markets and developing joint electricity trading in Southeast Europe, the state-run Electricity System Operator announced on Friday.

The Macedonian operator MEPSO and the Albanian OCT, have agreed to join the electricity markets. The so called "Day ahead" in the three countries so that they can more easily integrate into the single European electricity market.

The initiative is expected to lead to better opportunities for market participants and to improve security of supply in the region.

The plans are to consolidate the "day ahead" market segment of the common borders between the three countries to be accompanied by an implied allocation of interconnection capacities in line with the European target model, ESO said.

The three power operators also plan to set up a Regional Security Center in a Southeast European Union member state, but they did not indicate where.