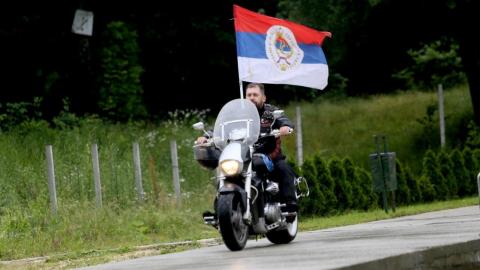 BIRN BiH investigated the operations of the Republika Srpska branch, its members and their political connections.

The group is well connected to Djokic's Socialist Party and the Independent Social Democrats of Bosnian Serb strongman Milorad Dodik, the Serb member of Bosnia's tripartite presidency. The two parties are allied in government in Republika Srpska, Bosnia's mainly Serb entity alongside a mainly Bosniak and Croat federation. Dodik is strongly pro-Russian.

Djokic did not respond to a BIRN BiH request for an interview for this story.

New Energy Company was registered in May 2017, six months before the Republika Srpska government invited bids to construct a new 1.25 megawatt hydropower plant on the river Stupcanica in the village of Nevacka, eastern Bosnia.

The Republika Srpska's registry of concessions show the contract was awarded to New Energy Company.

Tadic said the company has not previously carried out any other work.

"We have had nothing so far. I hope we will have something in the future," he told BIRN.

According to the terms of the concession, the first phase of the project - finalising all documentation, funding and permits - should already have been close to completion. The local municipality, Han Pijesak, said no permits had been applied...