"Some countries are telling Haradinaj - don't do it yet" 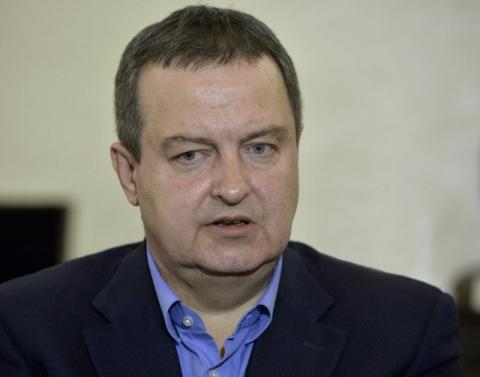 And not everybody wants to find a solution for Kosovo and Metohija, he remarked on Friday in Belgrade.

Dacic also pointed out that some countries are playing "a double game."
The minister responded in this way when asked "how it was possible that neither the US nor the EU and other major players are able to force Pristina to withdraw its taxes on Serbian goods."
"I do not believe that this is exactly the case, I have already expressed doubts that this is a double game, and now we need to determine who plays these double games and what is their goal," Dacic said.
According to him, not everyone are interested in revoking of the taxes a prerequisite for the continuation of the dialogue.
"We have a multiplication of various geopolitical problems, it's no longer just a matter of the East and the West intertwining there, but also of different interests within the West," said the head of Serbia's diplomacy.
He stated that some countries are encouraging Kosovo Prime Minister Ramush Haradinaj not to abolish the taxes, precisely in order not to continue the dialogue.
"Some countries are telling him - don't do it yet," Dacic said, adding that "some countries are telling Pristina to wait for the cancellation of the taxes until after the EU elections."
According to the minister, it is obvious that Germany and the UK "do not share enthusiasm for various reasons when it comes to quickly finding a solution."
"Ones are against it because of the elections, the others because new people will come to lead EU bodies, while yet others are against because they oppose the principle of delimitation and are in favor of Kosovo not changing its borders."
"We are the biggest supporters of not changing the borders Kosovo - it's just...

Bulgaria - One of the EU Countries with the Highest Shares of Total Revenue from Environmental Tax
President Iohannis sends condolences to family of Romanian who died in the Hanau attacks, Germany

Editorial: Adults locked in a room
Ambassador Kuzmin pays homage to Russian soldiers dead in Romania: Nobody is forgotten, nothing is forgotten