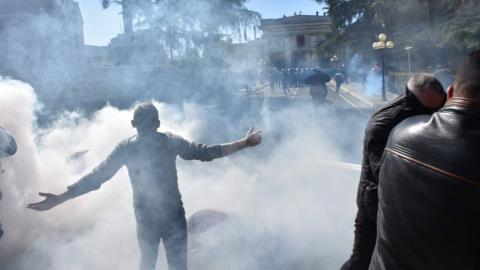 Anti-government protesters broke through police cordons and attempted to storm Albania's parliament during a major opposition-led rally in Tirana on Saturday.

Police used tear gas and water cannons to disperse the crowd, many of whom had come prepared with gas masks.

The angry mob threw stones and smoke bombs at police, pulling down security fences that were erected ahead of the demonstration.

The rally drew thousands of protesters from across the country, gathering on the central Heroes of the Nation boulevard ahead of the event.

Opposition Democratic Party leader Lulzim Basha was cheered when he appeared in the crowd, leading them on a march to the Office of Prime Minister Edi Rama, where police were already positioned.

Shortly after, the crowd moved to the parliament, where violence erupted, leading to riot police being deployed onto the streets.

After anti-govt demonstrators tried to break into Albania's parliament in Tirana, police let off tear gas and fired water cannons at the crowd. pic.twitter.com/E2kJR3haL5

At least one protester was incapacitated by tear gas inhalation and a police officer was seen attending to a colleague, who appeared lightly injured.

Opposition leaders announced that they plan to block the streets surrounding parliament for several days in an attempt to bring down the Socialist-led government of PM Rama in an escalation of the demonstrations that started a month ago.
However, late in the afternoon, Democratic Party leader Lulzim Basha ended the protest while announcing more protests in the coming days.
"Every day and every night there will be action from the citizens, protests, endurance," he told...