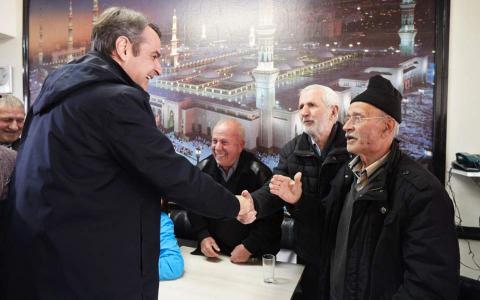 In the wake of Friday's deadly terror attacks at two mosques in Christchurch, New Zealand, New Democracy leader Kyriakos Mitsotakis described the province of Thrace in northeastern Greece as a symbol of peaceful coexistence between Christians and Muslims.
During a tour of the region on Friday with stops in Rodopi and Xanthi, which have a Muslim minority, Mitsotakis said the achievement of two religious groups living side by side must be carefully safeguarded.

Addressing a wide range of issues, the conservative leader also took the opportunity to lambaste Prime Minister Alexis Tsipras for praising the "failed socialist models of Latin America" on Friday in the presence of visiting Bolivian President Evo Morales.

He asked why it is that Greece is the only European Union country that backs the Venezuelan government. This, he added, only isolates Greece at a time...

Travel between regions unlikely to be allowed soon, says Petsas

Around 4 million euros in fines issued since start of lockdown