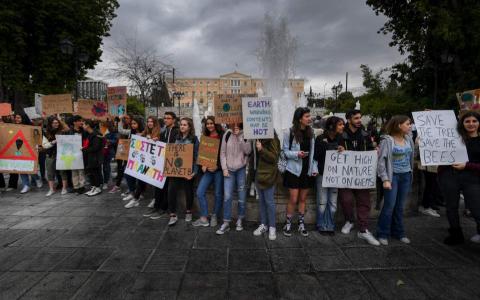 Greek students holding placards and shouting slogans take part in a "youth strike to act on climate change" demonstration in front of Parliament in Athens, Friday. Thousands of students around the globe, mobilized by word of mouth and social media, skipped class to demonstrate the failure of political elites to take action against global warming. The demos are inspired by 16-year-old Swedish activist Greta Thunberg, who began to protest outside her country's Parliament last year. Thunberg has been nominated as a candidate for this year's Nobel Peace Prize. [InTime News]