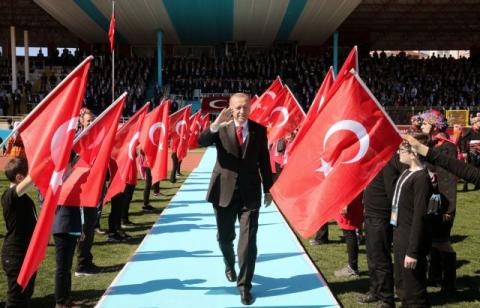 Speaking straight on the heels of a manifesto issued by the killer in the New Zealand massacre who declared that Turks must abandon Istanbul and the European part of the country, Turkish President Recep Tayyip Erdogan ratcheted up his nationalist rhetoric with threats against Greece and Cyprus and those who want to call Istanbul by the old name of Constantinople.

In a campaign speech ahead of local elections near the Turkish-Straits, Erdogan blasted those who continue to use the name Constantinople for present-day Istanbul.

'It's Istanbul, not Constantinople'

"You will never be able to turn Istanbul into Constantinople. We have been here for 1,000 years. Whoever tries to remove us from here will leave in a casket as we have done in the past," Erdogan declared.

Erdogan also lashed out against Greece and Cyprus regarding the situation in the Aegean and the Eastern Mediterranean.

"In Cyprus they are testing our patience because they are violating our rights," Erdogan said about the gas and oil exploration programme of the Republic of Cyprus.

"In the Aegean they are testing our patience by trying to limit us and keep us from setting foot there," he added.

Turkish Vice President Fuat Oktay and Foreign Minister Mehmet Cavusoglu are on a visit (17-18 March) to the site of the massacre at two mosques in Christ's Church, New Zealand.

«The manifesto that the terrorist released clearly shows that this was no individual act,» Hurriyet English quoted Erdoğan as saying, noting that he stressed the importance of exposing the unnamed groups he claims were behind the attacks.

In a televised interview...