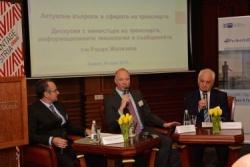 The necessary budget for the realization of all strategic railway projects in Bulgaria after 2021 is 4 billion levs. This was announced by the Minister of Transport Rosen Zhelyazkov during a working breakfast with representatives of the German-Bulgarian Chamber of Commerce and Industry and the Austrian Commercial Representation in Bulgaria.

This includes the railway connections with Serbia and Northern Macedonia, Vidin - Medkovets, Karnobat - Sindel, the introduction of a European train management system in several parts of the country, as well as the development of the Varna railway junction and that of Gorna Oryahovitsa.

"As an EU member state, we are pursuing a clear policy in line with European priorities, aiming to achieve optimal integration of transport networks in the European Union," said Rosen Zhelyazkov.

By 2030, the projects on the core TEN-T network must be completed and by 2050 all projects of the comprehensive network, Jelyazkov said.

Over 3.6 bln. BGN are needed for the construction of the Ruse - Veliko Tarnovo and Sofia - Kalotina motorways, as well as the Vidin-Vratsa-Botevgrad highway, Zhelezkov told the representatives of the German and Austrian business.

The meeting also discussed the current concession procedures that the transport ministry is the contracting authority and the forthcoming introduction of a toll system for heavy goods vehicles from August 16, 2019, the message of the Ministry of Transport said.

The concession procedure for Sofia airport is currently underway, which has been extended many times due to legal changes. They were voted last week, and now until April 4, candidates have to submit their bids.

Although it has been less than half a year since the introduction of the truck...