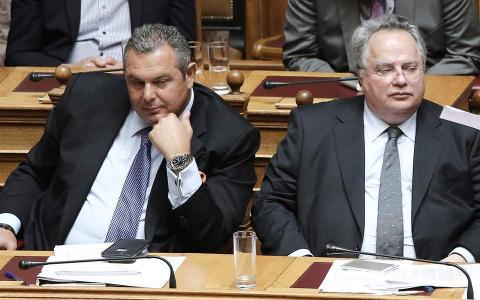 As Moscow recognized the Republic of North Macedonia by its new official name Monday, Panos Kammenos and Nikos Kotzias picked up their bickering over the so-called Prespes accord again.

Speaking on Real FM Monday, Kotzias, Greece's former foreign minister and architect of the Prespes deal, said that the Independent Greeks (ANEL) leader's opposition to the accord was a political sham as he had been aware that pursuing a settlement based on a compound name was part of the Tsipras government's manifesto in January 2015.

"He knew all about it," Kotzias said.

"From the very beginning he had given his consent to the start of negotiations to bring the issue to a close."

Calling Kotzias "the traitor of Macedonia," Kammenos threatened to send the ex-minister to prison.