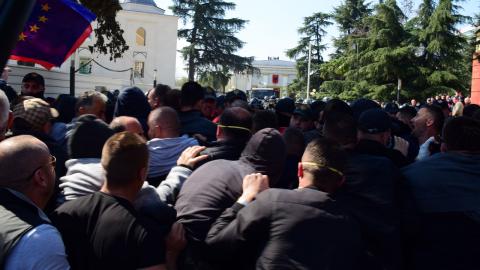 Protesters threw a coloured substance against one of MPs as he was entering the parliament in Tirana for the first time.

After the opposition parties summoned their supporters early in the morning, dozens of them threw firecrackers and smoke bombs while police pushed them back.

Unlike in previous protests, police did not use tear gas, although they were prepared with gas masks and water cannons.

This was the fifth protest organized by the opposition during the last month.

Monika Kryemadhi, head of the SMI and wife of Albanian President Ilir Meta, approached the police cordon herself, while protesters gave it another push.

Since then, several protests have taken place, some of which ended in violence.

Under the Albanian electoral system of closed lists, the seats of the resigned MPs have been offered to election candidates further down the list of the same party.

Some of them have agreed to serve, despite their respective parties branding them "traitors".

Three candidates from the main opposition centre-right Democratic Party have taken up seats along with nine from the SMI.

About 41 of 43 Democratic Party MPs have resigned their mandates along with 17 out of 19 MPs from the SMI.

About 25 candidates from the Democratic Party who have been invited to act as substitutes for their resigned colleagues have refused to do so.

But about 126 more candidates from the party remain in line. About 16 SMI candidates have also received invitations...