Remembering Zolotas: A speech in English with all Greek words 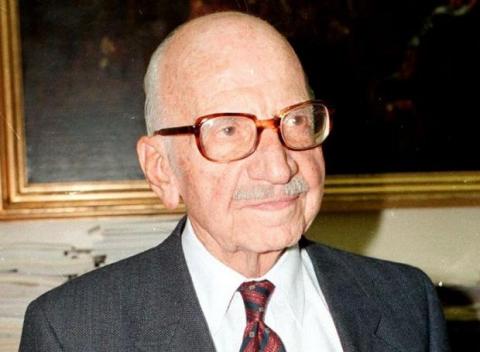 At the age of 24, he occupied the first Chair in Economic Law at the University of Thessaloniki, and soon occupied a series of top public posts related to his field.

Beyond excelling in his academic field, the cosmopolitan Zolotas harboured a deep love and knowledge of the Greek language.

Even those who are not acquainted with Zolotas' academic work may be familiar with his famed speeches before the IMF and the International Bank for Reconstruction and Development, in which he addressed a stunned audience in English but using only words derived from the Greek language.

"Kyrie, I eulogize the archons of the Panethnic Numismatic Thesaurus and the Ecumenical Trapeza for the orthodoxy of their axioms, methods and policies, although there is an episode of cacophony of the Trapeza with Hellas.

With enthusiasm we dialogue and synagonize at the synods of our didymous Organizations in which polymorphous economic ideas and dogmas are analyzed and synthesized. Our critical problems such as the numismatic plethora generate some agony and melancholy.

This phenomenon is characteristic of our epoch. But, to my thesis, we have the...