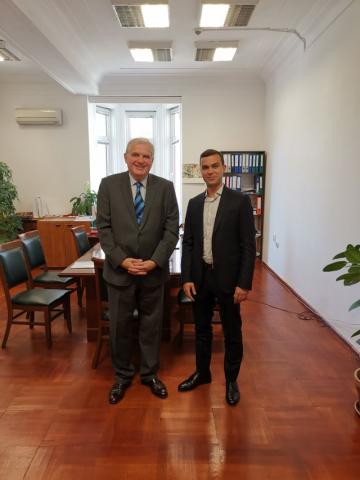 Dr. Boyko Takov, Executive Director of BSMEPA, held a meeting with the Ambassador of Argentina, HE. . Alberto Trueba and Mr. Jordan Stoychev, Head of the Economic and Trade Section of the Embassy of Argentine Republic to the Republic of Bulgaria.

The main purpose of the meeting was the interaction between the Embassy and BSMEPA in support of business contacts between companies from both countries.

The proposal of BSMEPA, which it sent to foreign embassies and trade sections for joint events, during which Bulgarian companies were introduced to the business conditions on the respective foreign market, It was discussed.

Dr. Takov and Ambassador Trueba agreed to organize a business event in Sofia Tech Park as an initiative of the new export incubator in order to include Bulgarian companies with interests in Argentina. Representatives of the Embassy will familiarize the business circles with the specifics of Argentine market. The aim is to increase the possibilities for direct contacts between Bulgarian and Argentine companies in order to increase and diversify the bilateral trade in both directions.

The focus of the conversation was also identifying new sectors with cooperation opportunities, including agriculture and energy, with an emphasis on renewable energy resources.