Clear advantage for PAOK and AEK in Cup semis 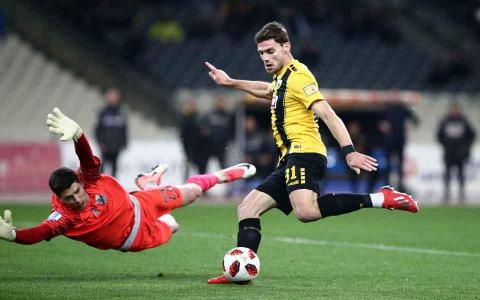 PAOK and AEK look set to renew their date in another Greek Cup final, the third in a row for the pair, as they have taken a clear advantage from their home games for the semiifnals of this year's tournament.

On Wednesday they both won 2-0, PAOK downing Asteras Tripolis in Thessaloniki and AEK defeating Lamia in Athens.

PAOK, the near certain league champion, scored an early goal with Leo Matos (who appeared to set off from an offside position), but its performance in front of a capacity crowd at Toumba was far from convincing against a spirited Asteras.

Eventually the host held on at the back, and when Matias Iglesias saw his second yellow card to leave the visitor with 10, Matos performed a moment of magic trying a spectacular sideways volley that screamed across the Asteras goal and into the net for 2-0.