"We respect sovereignty of others; you do the same" 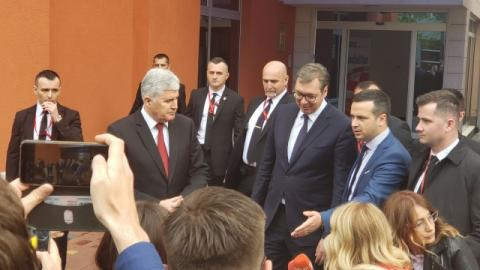 Therefore, Vucic said, speaking in Mostar, Bosnia-Herzegovina (BiH) on Tuesday, he expects other countries to act in the same way.

Vucic also pointed out that those politicians who think the territorial integrity of Serbia can be violated, and that it was possible to only damage Serbia are mistaken.
Asked how he commented on BiH Presidency Chairman Milorad Dodik's statement about "the redrawing of borders" - while the journalist also remarked that Vucic "supports Dodik's position" - the Serbian president replied that the reporter should not make statements about whether he supports someone or not.
"If you ask me what Serbia thinks about changing the borders in the Balkans, we consider it very important that everyone respects the territorial integrity of Serbia, while Serbia respects the territorial integrity of everyone else. So it has been and I hope that so it will remain," Vucic said.
He added that he considered as inappropriate the statements made by some politicians from Bosnia-Herzegovina who have been undermining the territorial integrity of Serbia in the belief that it is possible to damage only Serbia.
"I think this is a bad message and that nobody should violate anyone's territorial integrity in any way," Vucic said. He added that Serbia has no pretensions toward Montenegro, Bosnia-Herzegovina, Croatia, or Macedonia.
When it comes to cooperation with Milorad Dodik, a former president of the Serb Republic (RS) - the Serb entity in BiH - Vucic said that this cooperation is in the interests of the RS, BiH and Serbia, and that he believes in can improve in the future.
"I don't think anyone's had problems because of their good cooperation with Serbia, on the contrary," Vucic said.
Speaking about (Serbia's)...