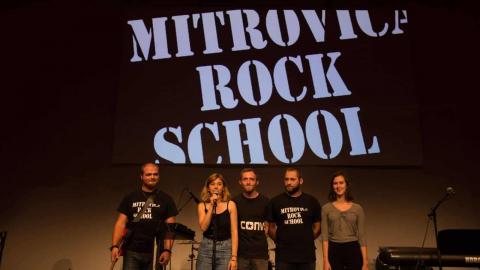 As a member of Kosovo's Bosniak community, Ilda was caught between two stools since birth - collateral damage of the age-old conflict over Kosovo between Serbs and Albanians.

She lived in the mainly Albanian south of Mitrovica until August 2018, but then shifted over the bridge, across the river that divides the town.

"The band, and our acquaintance with each other, have opened up new perspectives for me. It was because of the band that I started studying in the north and moved there," she says.

Ilda is one of 80 students of the Rock School, which was established in 2008 as part of the "Musicians without Borders" project, run by Community Building, an NGO from Mitrovica.

While hers might easily be a simple story of a young musician in a small town in southeast Europe, what makes it different is that she lives in a town that also routinely supplies the media with stories of ethnic conflict and political instability.

After the war ended in Kosovo, the Rock School was one of the first initiatives to rebuild bridges between the young in the northern and southern parts of the town.

This was not easy. It meant bringing together for the first time people divided since their early youth by the Ibar river.

The initial meetings were held in Skopje, in North Macedonia, as this was deemed "neutral ground."

For most of the young musicians involved, it was their first-ever contact with people "from the other side."

Bass player Lazar Mladenovic enrolled in the Rock School eight years ago, alongside studying physics at the Natural Mathematics Faculty.

After attending the summer music camp in Skopje, he became the only Serbian member...