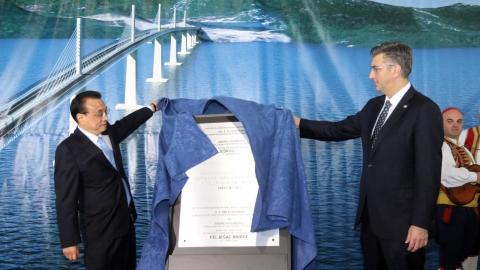 The Adriatic city of Dubrovnik, Croatia's best-known tourist destination, on Thursday and Friday will host the 16 + 1 summit, a Chinese initiative to strengthen business ties between China and 16 countries from Central and Eastern Europe.

The Summit 16 + 1, held under the title "Building Bridges of Openness, Innovation and Partnership", begins with a business forum that will host around 600 people.

It has brought representatives from six countries of the region: Albania, Bosnia and Herzegovina, Bulgaria, Croatia, Romania and Serbia.

On Thursday, Croatian Prime Minister Andrej Plenkovic and Chinese Premier Li Keqiang visited the construction site of the Peljesac Bridge and marked the completion of the first phase of construction.

The bridge, the most prominent symbol of Croatian-Chinese cooperation, will be 2,404 meters long and 55 meters high.

Long opposed by Bosnia, it is designed to connect the Croatian mainland with its southernmost region, the Dubrovnik-Neretva County, while avoiding crossing Bosnia's sole access to the Adriatic Sea, around the town of Neum.

The project is partly financed by the European Union and the contractor is a Chinese company, China Road and Bridge Corporation, which won the bid through an open tender.

Li arrived in Zagreb on Tuesday with a team of 250 people. During the first day of his visit, on Wednesday, Li met Prime Minister Plenkovic, Parliament Speaker Gordan Jandrokovic and President Kolinda Grabar-Kitarovic.

On Wednesday, six agreements between Beijing and Zagreb were exchanged and four more will be added in Dubrovnik. Chinese-Croatian cooperation covers a number of fields including harbours, railways, sports and education.

On Thursday, Plenkovic was due to host a ceremonial...