Hopes and Dreams, Stars and Schemes 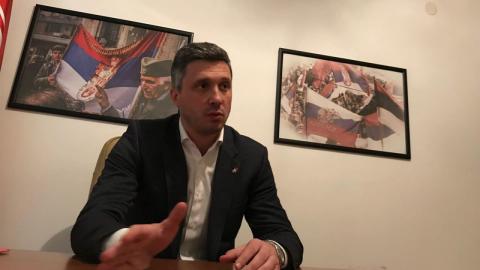 One of the rising stars of the '1 of 5 million' protests, which have been going on for months in Serbia, is Bosko Obradovic, the leader of the right-wing Dveri party. Deeply conservative, claims to espouses traditional Serbian values and supports closer ties with Russia.

He is also an unlikely, or unexpected, rising star, given the largely liberal base of this - and most other - protests in the Serbian capital over the past couple of decades. In an interview for BIRN, Obradovic sets out some of his views, as well as ideas for where the protests against the current Serbian government should go.

Controversial Scheme
A woman sits near a Turkish flag on a ferry in Istanbul, Turkey. Photo: EPA-EFE/ERDEM SAHIN

Aside from its efforts to sell economic citizenship, the Montenegrin government has also begun issuing expatriate cards to members of its diaspora as of early 2018. The idea is to foster closer relations between Montenegro and its sizeable diaspora.

Yet in one corner of this diaspora - in Turkey - the expatriate card is causing controversy, specifically among Turkish Bosniaks from Montenegro. Some community representatives support the new scheme, noting that card holders will be able to live and study in Montenegro, among other things. Others, however, warn that the card is aimed at undermining their Bosniak identity, along with potential claims to ancestral lands and property in Montenegro. We unpack the controversy and concerns surrounding the card scheme.