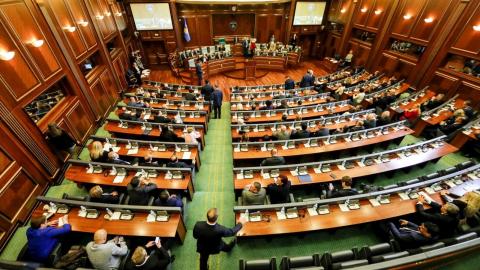 The Kosovo parliament met on Thursday to hold a special session on the exodus of young people, which deputies warned was having a highly damaging effect on the country's economy and future. The MPs were due to vote a resolution on the subject that night.

Likening the mass exodus to that of 2015, they said young people were forming long queues outside foreign embassies, trying to get visas to leave the impoverished and isolated country.

"Two thousand students … have left Prizren in one year. Not only young people but also whole families are leaving the country," Arber Rexhepi, a deputy from the opposition Vetvendosje party, lamented.

The opposition Social Democratic Party, PSD, blamed the situation in part on bad economic models applied after the independence war of the 1990s.

"The gap between the rich and the poor is getting bigger and bigger, and it is becoming impossible for the poor to survive here," PSD deputy Visar Ymeri said.

Vetvendosje claimed that the difference between the exodus in 2015 and now is that people were then trying to get into other countries illegally - but now the mass flight was being done legally through getting work visas.

Towards the end of 2014, with a peak in early 2015, thousands of Kosovo Albanians migrated to EU countries via Hungary, intending to seek asylum. Hardly any got it.

A 2016 report by the German Interior Ministry listed Kosovo and Albania among the three top countries whose citizens requested asylum over 2015.

Kosovars made up the second largest group seeking asylum in Germany that year, filing 37,095 requests. Only Albanians filed more, with a total of 54,762 applications.

At Thursday's extraordinary session, deputies said that not only unemployed people but also...