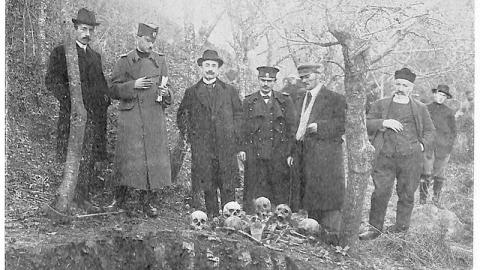 The central topic of Pisarri's book, which he developed out of his PhD thesis and which was originally published in Italian, is crimes against Serbian civilians in the part of the Kingdom of Serbia that was occupied by Bulgaria in 1915. The book will be issued in a Serbian translation this autumn.

But he also devotes parts of the book to other major events of the Great War, such as the typhus outbreak which killed some 70,000 civilians, the Serbian army's retreat through Albania as well as international peace conferences and the issue of refugees, the 1912-13 Balkan wars and civilian casualties on all sides.

Pisarri argues that the First Balkan War - which saw the demise of Ottoman Turkish power in the Balkan states - led to violence, looting and massacres against Muslims by Bulgarian, Serbian and Greek troops and guerrillas across the region.

The Second Balkan War, which saw the conflict between Serbians and Greeks on the one side and Bulgarians on the other, saw atrocities committed by all sides.

But the book focuses on crimes committed in the parts of the Kingdom of Serbia that were under the occupation of Bulgaria, which was one of the Central Powers during WWI, alongside Germany, Austria-Hungary and the Ottoman Empire. At roughly the same time, extensive crimes against civilians were also being committed in parts of Serbia that were under Austro-Hungarian occupation.

During the war, Bulgaria held the eastern and southern parts of Serbia, two-thirds of Kosovo and part of Macedonia.

Pisarri argues that Bulgaria had one major aim - the permanent annexation of these territories and the Bulgarisation of the domestic population.

"Bulgarian politics in eastern and southern Serbia and Macedonia is a very well organised one....