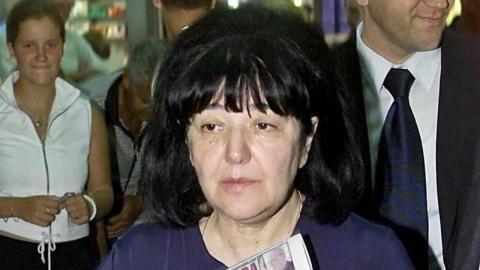 Mirjana Markovic, the widow of the former president of Yugoslavia, Slobodan Milosevic, died in hospital in Moscow on Sunday, Serbian media reported.

Markovic is reported to have undergone surgery several times in Russia recently, after which her condition deteriorated. The cause of death was not immediately made public.

She provided constant political backing for her husband Milosevic as he led the country into disastrous wars in Croatia, Bosnia and Kosovo, the last of which ended in NATO bombing Yugoslavia and forcing Belgrade to abandon its rule over Kosovo in 1999.

Some saw Markovic as the power behind the throne and as her husband's main adviser. In 1994, she set up her own party, the Yugoslav United Left, JUL, which governed in coalition with Milosevic's Socialist Party of Serbia.

"We may not have had the same opinions at all times, but I always respected her, as Slobodan Milosevic's wife," Dacic told Serbian media.

However others recalled her role in supporting her husband's policies during the Balkan wars.

"She was an integral part of his murderous regime, and like so many, she too fled justice, living out her days in exile in Russia," political scientist Jasmin Mujanovic wrote on Twitter.

Markovic left Serbia for Russia in 2003 after Milosevic was sent to The Hague to stand trial for wartime crimes, although he died in 2006 before the verdict in his trial. She was given political asylum by Moscow.

She and her son Marko and daughter Marija were all wanted in Serbia for crimes ranging from corruption, abuse of office to the...