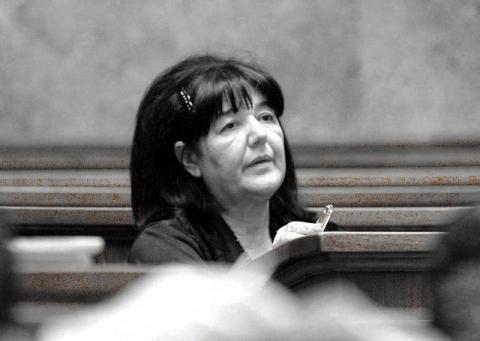 According to unofficial information, she died in a hospital in Moscow.

Dragan Radovic from the Freedom Association told Tanjug that he was in contact with the family and that Markovic died of pneumonia after undergoing two surgeries.
Namely, more than a month ago, Markovic fell and broke her right arm, after which she became bedridden, leading to fluid accumulating in her lungs that caused the inflammation leading to her death.
Radovic said that she wanted to be buried in Pozarevac next to her husband, but that the family would have the final say on this.
Markovic died in Russia, where she had been granted asylum in 2010 after fleeing from the judicial organs of Serbia who had issued a warrant for her arrest as part of an investigation into the abuse of distribution of state-owned apartments in 2000. Last month, the Belgrade Appellate Court overturned the verdict by which she was sentenced to a year's imprisonment, after a process that lasted 19 years.
Representatives of Russia's General Prosecutor's Office in 2010 announced that Markovic was enjoying the status of a political refugee in that country and that her arrest on the Interpol notice issued by Serbia was not possible.
Markovic was born on October 10, 1942 in Pozarevac, eastern Serbia.
She studied sociology at the University of Belgrade, where she also received her doctorate degree, and later worked as a university professor.
In addition to her academic career, she was best known for her political engagement, as one of the founders of the JUL (Serbian acronym for Yugoslav Left) coalition, consisting of 23 left-wing and communist parties.
Until October 2000, her party was the main coalition partner of Milosevic's Socialist Party of Serbia (SPS).
...

Stefanovic: Vucic to meet Djukanovic soon, the attack might be ethnically motivated

"There can be neither Great Serbia nor Great Albania, it can only be great tragedy"

A new case of suspected coronavirus in Europe