Belgrade to consider countermeasures against Pristina 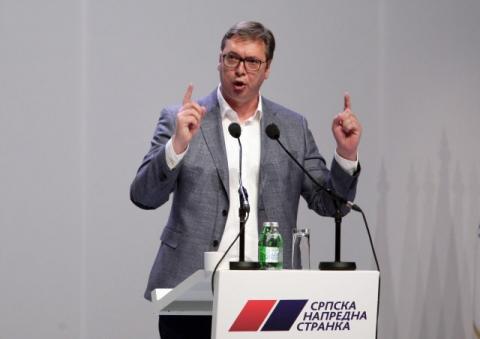 The Serbian president and leader of the ruling SNS party told a party gathering in Belgrade that he would face a request to recognize a full independence of Kosovo, without divisions and "full and integral territory of an independent Kosovo."

He said he would speak with the presidents of China and Russia in Beijing and then head to Berlin for very difficult meetings with the leaders of France and Germany.
"I will tell you right away: nothing good awaits us there and I expect nothing good. The only thing I expect is a start of requests for a new format where the goal would be a recognition of independence without Serbia getting anything," he said.
They will request that we return to the Belgrade-Pristina dialogue without the Kosovo Albanians scrapping their taxes (incread by 100 percent last November) on Serbian goods, he said.
"I will not accept a resumption of any dialogue without a scrapping of the taxes, whatever the pressure," he said after the SNS Presidency meeting in Belgrade.
Speaking about the demands and pressure on Serbia to recognize Kosovo - it's southern province, where ethnic Albanians 11 years ago unilaterally declared independence - Vucic said he was "not exaggerating."
"And we should be lucky if they don't introduce a special tribunal for Serbs and convict u for all sexual crimes committed in the Balkans. I do not exaggerate at all, I even softened it," Vucic said.
Accordingly, he added, there will be great pressure.
"They will also support internal elements in order to reduce the strength of the Serbian state and to make it easier to reach that goal," Vucic said.
He recalled that there was "nothing that Albanians have not done against Serbs and Serbia" - and explained: "They did not meet...

Kon: Serbia on the way out of the epidemic