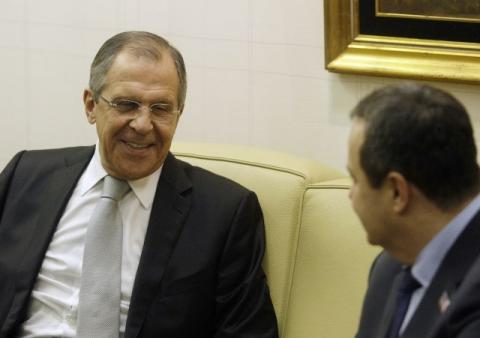 Russian Foreign Minister Sergei Lavrov said this in Moscow after his meeting with Serbian counterpart Ivica Dacic, adding that the West also needs to force Pristina leaders to stop with provocations and confrontational policy aimed against Belgrade.

He stressed that Russia will not allow the Security Council to change the mandate of the United Nations in Kosovo. "It seems to us that the West is trying to force the UN Secretariat to push through some proposals that would undermine the mandate of the UN Mission in Kosovo, which would be a direct violation of (UNSC) Resolution 1244, and we will do everything in our power to prevent this provocative plan from being implemented," Lavrov stressed.
Lavrov also announced that Russia will continue efforts to develop coordination of foreign policy with Serbia. "We are continuing intensive dialogue and contacts at the highest level, the tone for which was particularly set by the visit of President Vladimir Putin to Belgrade in January," Lavrov said.
He recalled that Putin spoke with officials in Belgrade at the time about the implementation of previous agreements, and that new forms of cooperation in the field of economy, foreign policy and inter-parliamentary exchange had been agreed.
Lavrov reiterated today that Moscow insists on implementing UN Security Council Resolution 1244, which means direct dialogue between Belgrade and Pristina and respect of the territorial integrity of Serbia.
"In this context, we will contribute to finding solutions in every possible way. And what concrete solution can Russia support? I point out that, acting on Vladimir Putin's statements, at the level of the Ministry of Foreign Affairs, we have repeatedly emphasized that we will accept any solution that suits...

Painter Vladimir Zamfirescu has died at 84