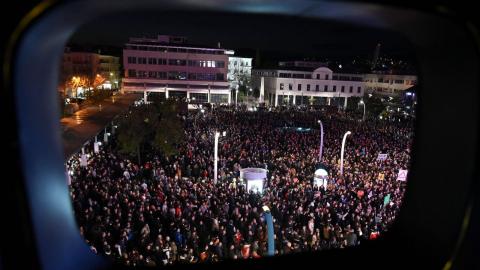 On Thursday, a new anti-government movement, "Do slobode" ["To Freedom"] will stage its own protest in front of the Prosecutor's Office in Podgorica - after the prominent businessman Dusko Knezevic was not allowed to address the months-long protests organized by the civic "Odupri se" ["Resist!"] movement.

The rally in front of the Prosecutor's Office follows polemics in the media between Knezevic and leaders of the Odupri se movement, who have so far refused to involve him directly in their activities.

The alternative protest will also reportedly be supported by the main opposition Democratic Front, which is seen in Montenegro as a sign of a widening dispute in opposition ranks.

Media in Montenegro quoted Front officials as saying they support "spreading anti-government movements", but not revealing whether the pro-Russian alliance was directly involved in supporting the Do Slobode protest.

Bozidar Jovanovic, from Do Slobode, said Knezevic was financing their organisation, but has also long backed the Odupri se movement.

"Knezevic supported the Odupri se movement from the beginning. There were some disagreements - but in the meantime they have been settled. For now on, we will work separately - but it is possible that the protests could unite," Jovanovic said on Wednesday.

The hitherto united opposition has staged almost two months of peaceful daily protests against the government - despite making little progress in forcing President Djukanovic to quit.

Resist took to the streets accusing Djukanovic and his governing Democratic Party of Socialists, DPS, of presiding over poverty, a loss of human rights...