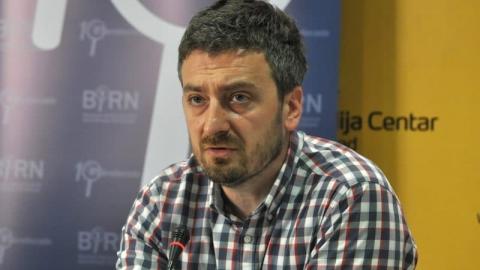 The Balkan Investigative Reporting Network called on the Serbian police and prosecution on Thursday to take action after BIRN Serbia editor Slobodan Georgiev was vilified in an online video.

The video, which was posted on Twitter, is a montage of Georgiev's statements taken out of context to suggest that he publishes lies, and tabloid headlines smearing the BIRN journalist and other Serbian investigative media.

"The publication of the video was followed by numerous comments [on social media] containing threats and insults," BIRN said in a statement.

As well as targeting Georgiev, the video shows tabloid articles smearing BIRN, the Centre for Investigative Journalism of Serbia, CINS, and the Crime and Corruption Reporting Network, KRIK.

The montage also includes clips of Kosovo Prime Minister Ramush Haradinaj and Albanian Prime Minister Edi Rama. Organisations and individuals perceived as critical of President Aleksandar Vucic's government are commonly depicted in pro-government tabloids as being in league with Albanian leaders against Serbia.

The video was posted from a Twitter account bearing the name of Natalija Dugonjic, reportedly a low-ranking state official. BIRN could not independently verify that the account belongs to Dugonjic.

The prosecutor for high-tech crime, Branko Stamenkovic, told the website Insajder on Thursday that the prosecution is "analysing [the case] in order to see if it is legally obliged to investigate".

Prominent investigative journalists and the Journalists' Association of Serbia, UNS, have also condemned the video.

The editor-in-chief of KRIK, Stevan Dojcinovic, called it a "textbook example of drawing a target on someone's forehead".<...