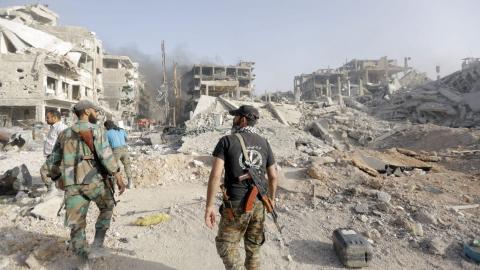 Currently, a group of 108 women and children from Albania, Kosovo and North Macedonia want to return to the Balkans from the Al Hol camp. There are a small number of ethnic Albanian families in two other camps in Syria.

According to a 2017 study by the New York-based Soufan Center, a research body focused on global security, that year around 90 people from Albania were still with the Islamic State, 138 from Kosovo and around 140 from North Macedonia.

The caliphate may have been toppled, but the way home for such women and children looks more complicated than they could probably have imagined, with authorities in the three Balkan states reluctant to see them return and so far without a plan as to how they would be repatriated.

'These children are victims'

Al Hol is comprised of thousands of tents behind a fence perimeter in the Syrian province of al-Hasakah. According to the United Nations, it currently holds some 73,000 people.

According to the UN Office for the Coordination of Humanitarian Affairs, some 65 per cent of people in the camp are children under the age of 18. Roughly 27 per cent of the total are women.

Internally displaced Syrians and Iraqi refugees make up the large majority, but 15 per cent are so-called third-country nationals.

Many of the Albanian women and their children are desperate to...