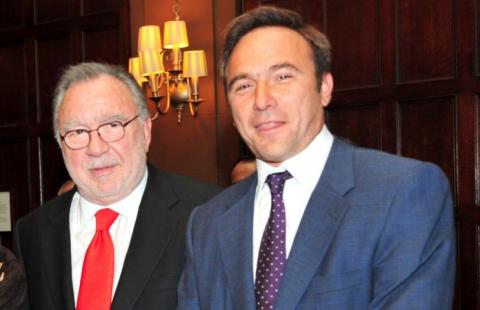 Asked about Petros Kokkalis (now a European Parliament candidate on SYRIZA's ticket) and his relationship with his father, Sokratis, Marinakis offered his account of why the father and son are not on good terms.

He spoke of the dark alleyways of Greek football and maintained that Kokkalis "gave" businessman Thomas Mitropoulos (who has had a sketchy course in Greek football) to PAOK FC owner Ivan Savvidis and to AEK owner Melissanidis in order to harm Olympiacos.

Marinakis also spoke of the electoral collaboration between the ruling SYRIZA party and Kokkalis.

Marinakis played down talk of tensions with Petros Kokkalis, who has given a spate of interviews in which he has dropped barbs against  Marinakis. Both were elected on Mayor Yannis Moralis' ticket as members of the Piraeus City Council and Kokkalis resigned his seat recently in order run in the elections.

"There is no dispute and there is no reason for me to run around to television and radio stations to accuse him. I do not want to talk about it. It is without merit. [Petros Kokkalis] was with us [on the City Council ticket] because his father requested this so that he could have something to do. He had failed both in his father's businesses and in Olympiacos FC and in the amateur Olympiacos team, where he left a debt behind. I have nothing to say to him," Marinakis said.

The shipowner also spoke about his relationship with Sokratis Kokkalis.

"The only thing we have in common is my succeeding him [as owner of]...