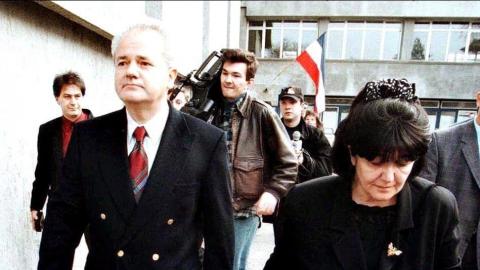 In the abuse of office case, Markovic was accused of inciting Zivka Cica Knezevic, who at that time was a Serbian government secretary and a member of the government housing commission to give an apartment to Ilona Pesic, a woman who babysat Markovic's grandson.

The indictment said that Markovic told Knezevic that Pesic was going to start work at the presidential residence, where the Milosevic family lived, and that was necessary to solve her housing problem. Knezevic then ordered a fellow worker to prepare a decision to give an apartment in Belgrade to Pesic to use.

A month and a half later, Pesic bought the apartment at a price that was lower than its market value, and the Serbian government paid for its renovation.

In June 2018, Belgrade High Court found Markovic guilty and sentenced her to one year in prison.

The Appeals Court quashed the verdict in March 2019, saying that Markovic's defence's appeal, which argued that it was not clear why the High Court didn't apply the statue of limitations, was reasonable.

When the trial initially started in March 2003, Markovic didn't appear in court, and it was decided to try her in absentia.

The Centre for Investigative Journalism of Serbia has reported that the trial was restarted several times and the indictment repeatedly amended during the process.

As Markovic didn't turn up for her trial, the court ordered her to be remanded in custody and an arrest warrant was issued, although she was never detained.